Read, liked, recommend it and believe that it only adds, even if I disagree! 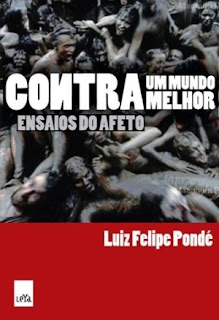 On this book, the author seek to take the philosophy outside the classroom to debate it in public, writing about the world on the 21st century, with the objective of shaking up the readers, and freeing them from the apathy and the neutrality.

Comentary:
On the same perspective as Zizek, Pondé makes us think on our hypocrisies, making us realize we are nothing like the politically correct speech, questions us about the advances, which really are not progress, but neglect reality. Yes, it seems to me that we are tragic and cynical orphans of our personal lives!
Some people tag him as immature and egocentric. I ask, has anyone ever seen a mature man? As far as I know, there are only mature men composting cemeteries! With being egocentric, there is no reason to discuss, since we are all radically free because absolutely existing on the narrow path of ourselves.
I do not agree with everything Pondé thinks, but with the majority of what he has written, especially because it made me think, made me hurt. Now, who is afraid to think and feels fear from the pain of knowledge of knowing that nothing that you think has any value beyond your poor and limited existence, should not read it, under pressure of judging the writer himself insane, certificated of his own insanity.
The hysterical feminism has not yet realized, when it criticizes Pondé, that he is not against women, nor does he put doubts on their conquest. What he questions is that if this new woman, fabricated by a society that grinds identities, that destroys everything made on the course of history, is really what men want. Now, who understands what women want are men, and vice versa, which would only change if we would change places, absolutely be one another, strangers to ourselves, absolutely indistinguishable on our values.
Really I do not want a better world. I want multiplicity, diversity and absolute Freedom. As such, the world may not be just better, but a more human world as well!